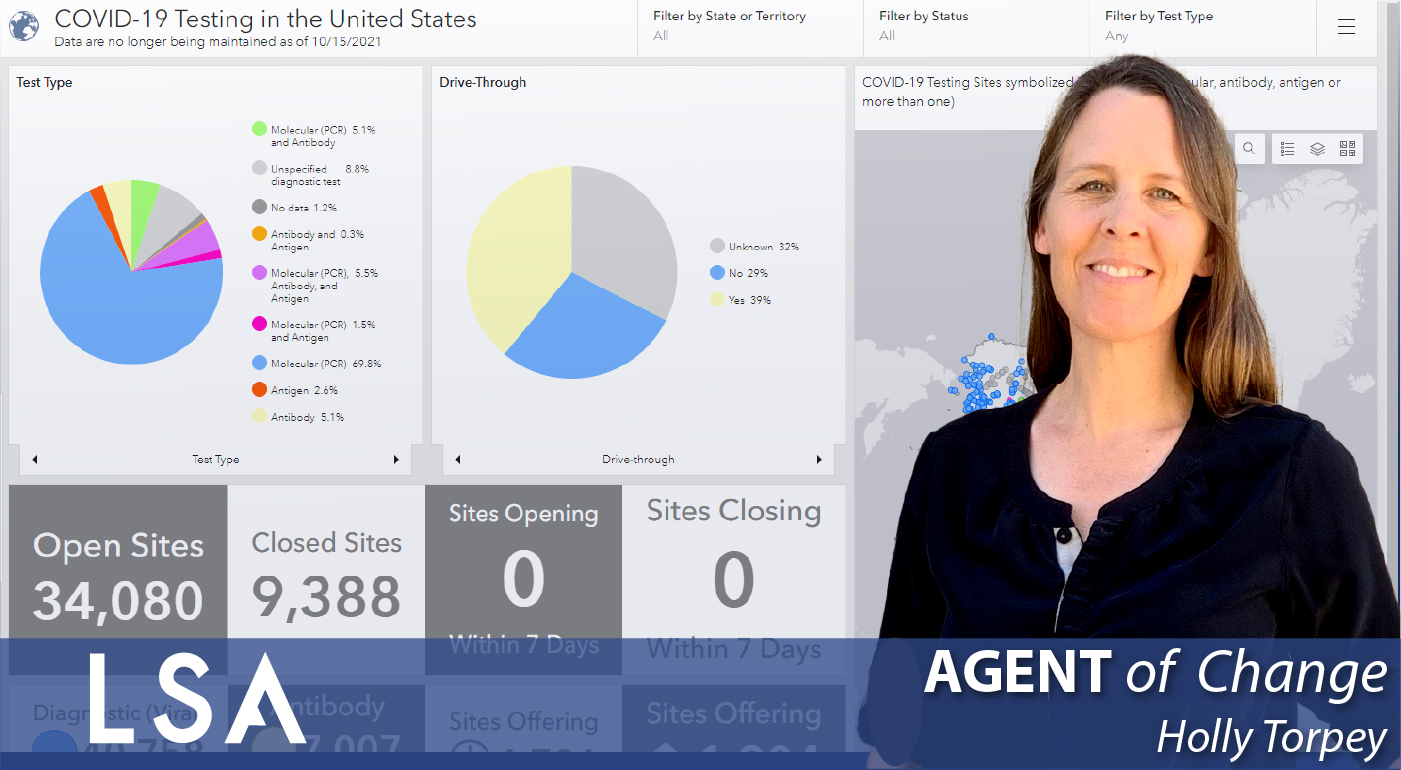 Growing up in Meyers, outside South Lake Tahoe, Holly was surrounded by National Forests and has embraced a love of nature from an early age. Both of her parents loved the natural environment. Her dad was on ski patrol, and they spent most of their family time outdoors.

Wanting to explore the world beyond her small town, Holly went to Boston University for 2 years and graduated from the University of New Orleans with a degree in Geography and an emphasis on Environmental Analysis. She took a class on the NEPA Environmental Assessment process where she met a visiting professor who offered her an internship at Minerals Management Service (MMS) (now the Bureau of Offshore Energy Management). At MMS, Holly worked on an environmental justice review application in ArcView and realized how powerful GIS and spatial analysis could be. This was the origin of Holly’s continued passion for developing interactive mapping applications. After graduating, Holly worked at the USGS National Research Wetlands Center for a year and a half. During that time, she did extensive field work in the marshes and swamps of South Louisiana and used aerial photography, image processing, and change analysis to monitor projects under the Coastal Wetlands Planning, Protection, and Restoration Act.  She then went back to MMS as a geographer, where she developed applications that allowed the analysts to quickly assess new offshore oil exploration permit applications and contributed to an Environmental Impact Statement (EIS) for floating production, storage, and offloading systems in the Gulf of Mexico. After MMS, she worked as a GIS Solutions Architect for Tobin International in Houston.

After taking time off to join her husband on a series of domestic and international moves for his career and to raise their children, Holly decided to pursue her Masters in Geographic Information Science and Technology at USC to further her skills in GIS. She went to work part-time as the Program Coordinator of GISCorps, a nonprofit organization that matches GIS professionals with nonprofit organizations to provide short-term GIS services on a volunteer basis. GISCorps also provides volunteer GIS support to government agencies dealing with natural disasters or humanitarian crises. Their database of over 7,000 registered volunteers around the world enables them to find the right volunteers for a wide variety of GIS projects.

Holly’s motivation to work full-time in GIS led her to join LSA while continuing to volunteer with GISCorps and serving on their Advisory Board and Disaster Response Subcommittee. She attends two monthly meetings and mobilizes during disasters like hurricanes, tornados, floods, earthquakes, and fires.

When the COVID-19 pandemic occurred, Esri’s disaster response program (DRP) requested that GISCorps assemble a team of volunteers to develop a nationwide

COVID testing site location dataset to assist federal agencies in identifying gaps in testing availability. Holly led the project, which ran for 18 months and involved hundreds of volunteers, dozens of partners, and multiple web mapping applications and dashboards. The volunteers eventually mapped over 72,000 testing and vaccination sites, and their data were incorporated into the State of California testing site locator mapping tool. The GISCorps dataset remains the only source of nationwide testing and vaccination site location data available for free download by the general public, researchers, press, and government agencies.  Click on the following link to learn more about this effort: https://covid-19-giscorps.hub.arcgis.com/pages/contribute-covid-19-testing-sites-data.

Another big GISCorps project that Holly helps to lead is called PhotoMappers. In a PhotoMappers activation, a large team of volunteers scour social media and news outlets to find and geolocate photos of on-the-ground conditions during natural disasters, adding them to an interactive map using a Survey123 form embedded in a Volunteer Portal built with Esri’s Experience Builder. An administrative team of experienced volunteers with extra training then vets each photo for relevance and positional accuracy and enriches each photo point with FEMA Community Lifelines and preliminary damage scores. The vetted photos and data are then made publicly available in another Experience Builder application that is used by federal, state, and local emergency managers as a source of early situational awareness to support decisions about resource allocation and response efforts. PhotoMappers is a partnership among GISCorps, the National Alliance for Public Safety GIS Foundation, and CEDR Digital Corps.

The PhotoMappers team responds to natural disasters throughout the United States and its territories and has been activated for multiple tornados, hurricanes, floods, and earthquakes. Click on the following link for more information: https://2020-crowdsourced-disaster-photos-napsg.hub.arcgis.com/.

When asked about her passion for assisting PhotoMappers, Holly mentioned that she is grateful to be able to actively assist when disasters hit. There was a brief period of 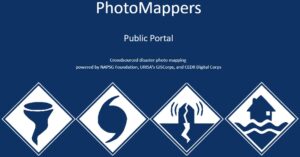 time where she and her family were near, but unaffected by, a series of natural disasters. In May 2004, the Charles De Gaulle airport international terminal collapsed the same day they were flying out of it. In December 2004, they were in Thailand during the historically destructive Indian Ocean tsunami but had luckily opted to spend the holidays in the mountains rather than at the beach. Finally, in August 2005, she and her family were in south Louisiana during Hurricanes Katrina and Rita. Again, Holly was lucky, but remembers the feeling of helplessness seeing others struggling to survive a disaster but being unable to help in a meaningful way. Finally, when Hurricane Harvey struck Houston in 2017, she found her way to GISCorps and was thrilled to finally be able to directly help those affected by using her GIS skills.

Beyond assisting with mapping natural disasters in the United States, Holly has leveraged her skills to assist GISCorps and the World Health Organization in mapping the locations of buildings using satellite imagery for polio vaccination campaigns in rural Africa (DRC and Horn of Africa) and in the Middle East.

Additionally, Holly has volunteered since 2012 with Kiva.org, a microfinance nonprofit. They connect micro-entrepreneurs in developing countries with lenders from around the world. Lenders are individuals who lend in $25 increments to people who would not otherwise have access to loans or credit to advance themselves or their communities. As borrowers repay their loans, lenders see their account balance increase and can re-leverage the loan amount to assist other entrepreneurs of their choosing. Holly is on Kiva’s Review and Translation Team, translating about 20 loan descriptions from Spanish or French to English each month. Please click on the following link for more information on Kiva.org: https://www.kiva.org/.

Thank you, Holly, for your volunteer service and trying to make this world a better and safer place. You truly are an Agent of Change!