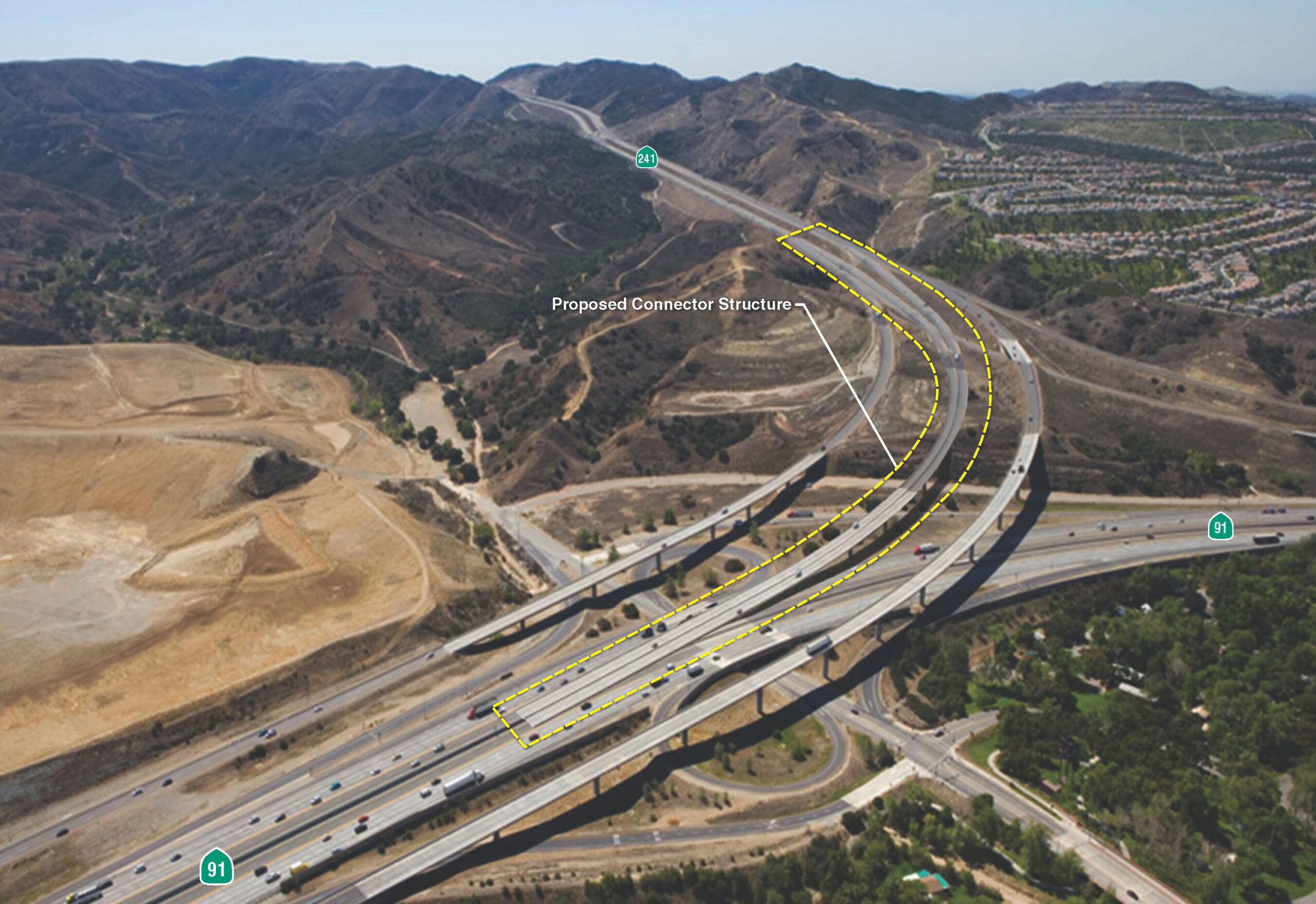 LSA is honored by the recognition the SR-241/SR-91 Tolled Express Lanes Connector Project Team has received from the APA Orange Section 2020 Awards. Working as a subconsultant to the Foothill/Eastern Transportation Corridor Agencies (F/ETCA), LSA provided various technical analyses and prepared the CEQA and NEPA document. The Orange Section program honors innovative plans and projects, distinguished individuals and other contributions to the planning profession. The SR-241/SR-91 Tolled Express Lane Connector Project was selected for an Award of Excellence under the Hard-Won Victories category.

A short video introducing the 2020 award winners has been posted.

The certification of the Final Supplemental EIR/EIS for the SR-241/SR-91 Tolled Express Lanes Connector Project marks the culmination of F/ETCA’s and Caltrans’ 25 years of effort to complete State Route 241. The SR-241/SR-91 Tolled Express Lanes Connector Project will provide substantial travel time saving and increased speed in the SR-91 Corridor. This project extended over multiple jurisdictions and could not have been done without the collaborative efforts of F/ETCA, Caltrans, and other agencies. Overall, this project shows the importance of such collaborations for future regional transportation projects.

The TCA planned the SR-241/SR-91 Tolled Express Lanes Connector Project in order to connect the SR-241 tolled lanes to the SR-91 Express Lanes. Due to the complexity of several planned improvements and the recently completed RCTC express lanes, there were questions raised by regional transportation authorities, local cities, and the public over the potential for geometric conflicts, construction fatigue, and construction traffic detour impacts to local roads. 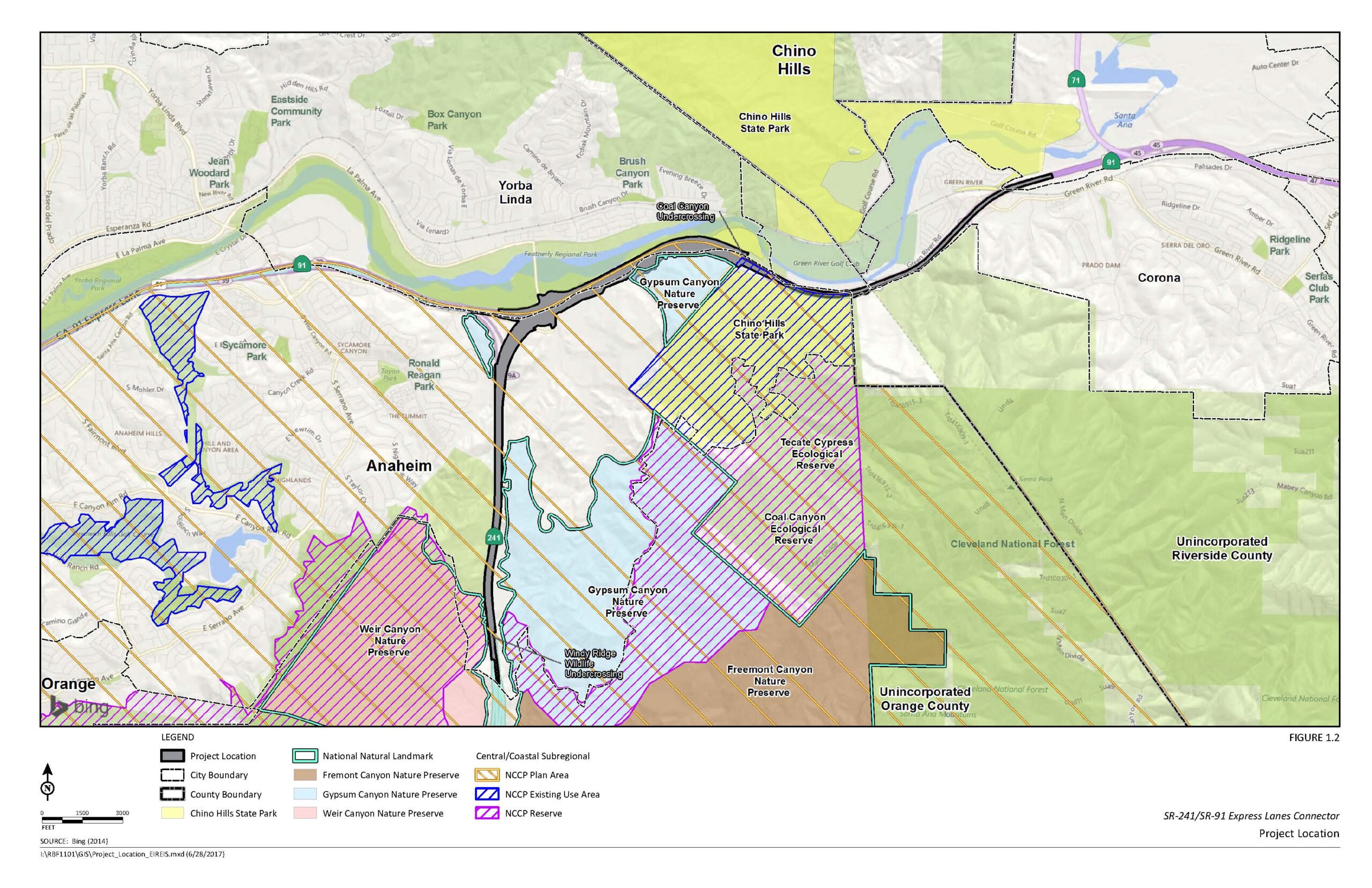 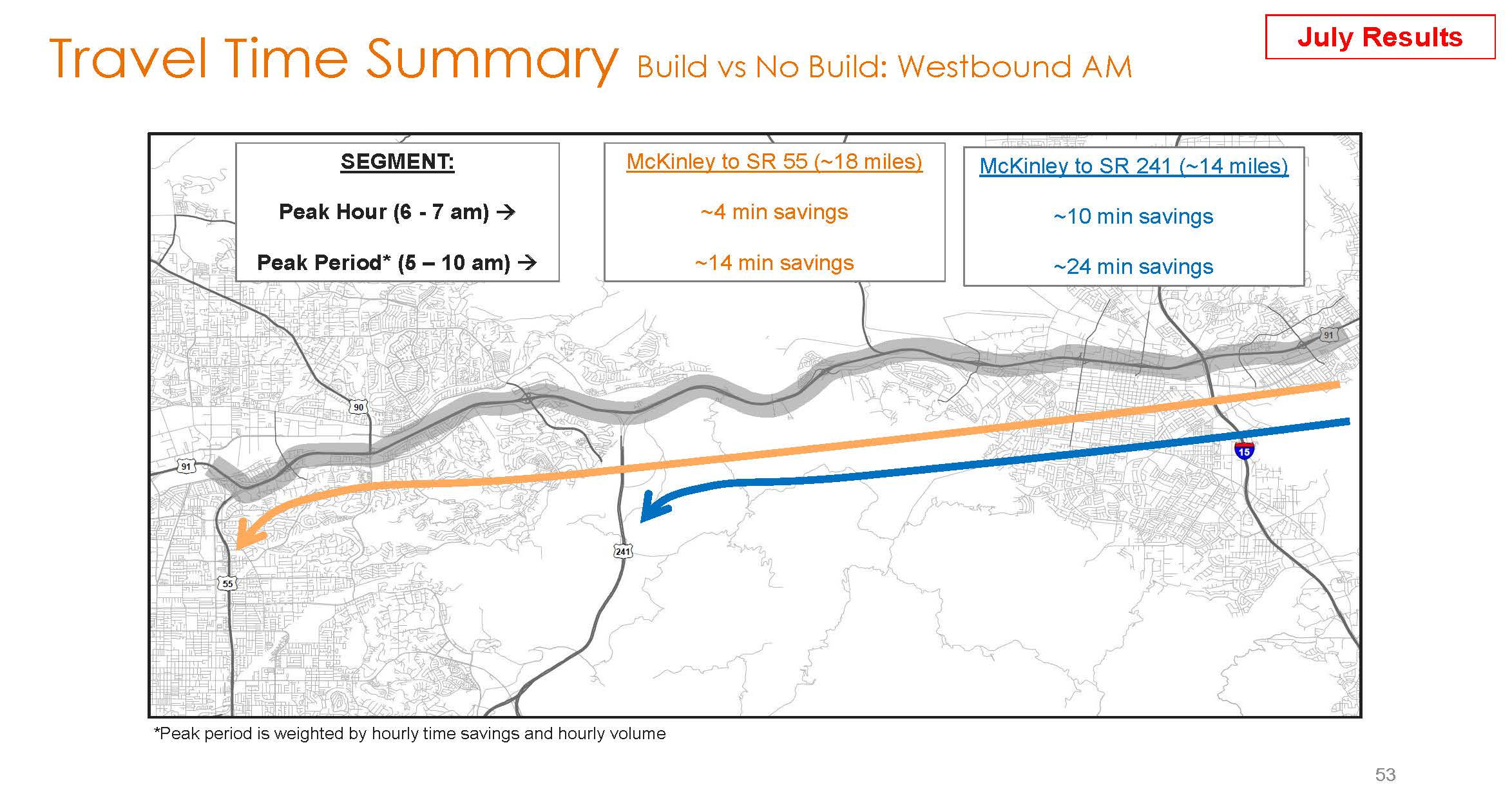 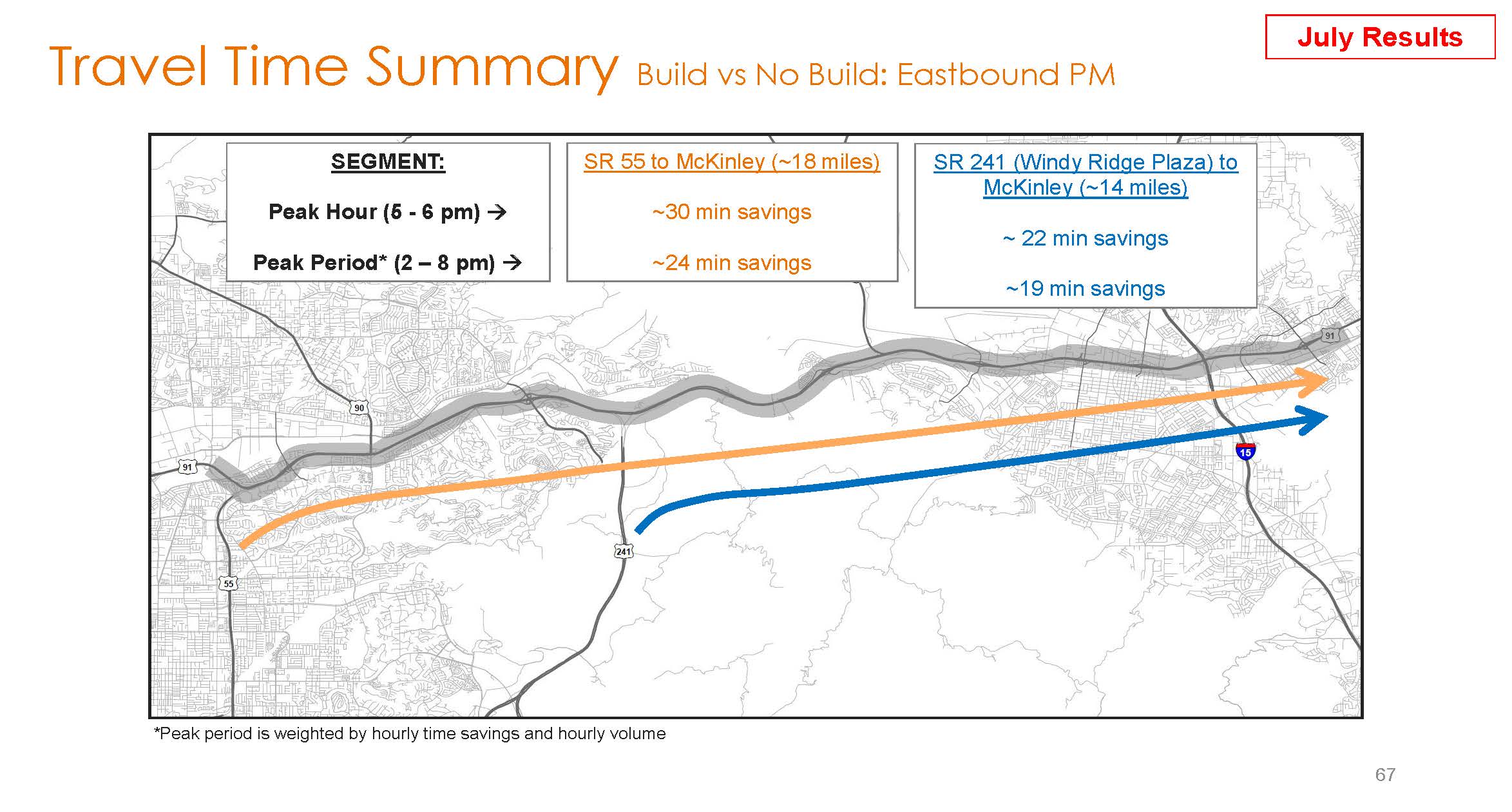 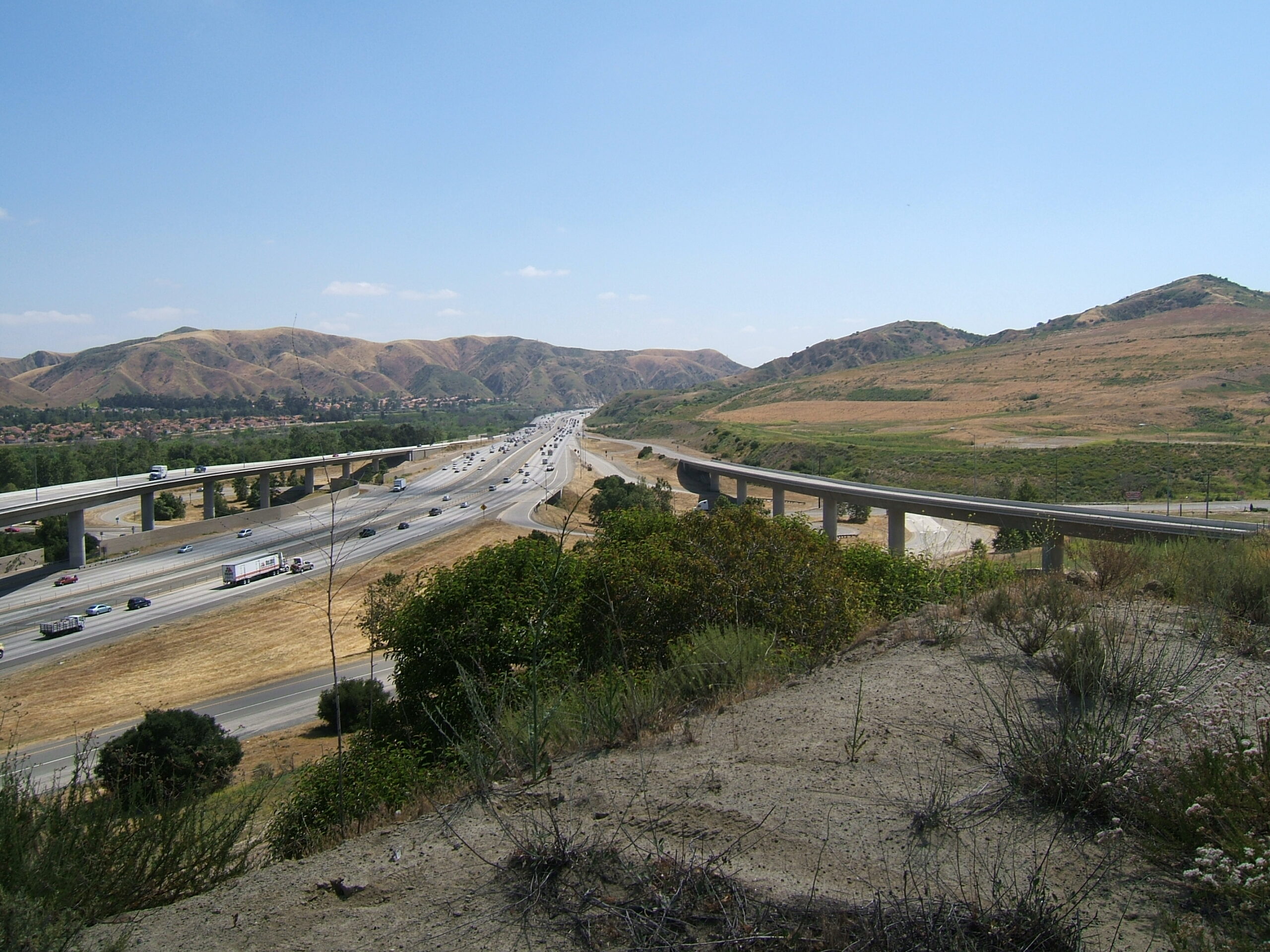 An additional step in gaining approval of the project occurred during the public review period for the Draft Supplemental Environmental Impact Report/Environmental Impact Statement (EIR/EIS). OCTA suggested that the analysis in the environmental document be updated to include traffic volume data anticipated to be available in spring 2017 with the opening of the RCTC Corridor Improvement Project (CIP). TCA agreed to conduct a traffic analysis for a future year (2025). This began three years of extensive analysis and negotiations to address the concerns related to traffic operations and sequencing of other planned improvements. To address OCTA’s specific concerns related to the traffic analysis, a 2019 Traffic Analysis was prepared, which used an Opening Year of 2025 and includes the SR-91 CIP Initial Phase.

After substantial coordination efforts, the 2019 Traffic Analysis was prepared addressing a variety of technical issues including general and express-lane travel times, specific congestion issues in Riverside and Orange Counties, sequencing of related capital projects, and express-lane ingress and egress congestion. These analyses were reviewed by technical representatives from all agencies. With progress stalled, new concerns were raised about the delay between the analysis presented in the technical studies and Draft Supplemental EIR/EIS and approval of the Final Supplemental EIR/EIS.

After almost three years since the close of the public review period for the Draft Supplemental EIR/EIS and time running out to certify the Final Supplemental EIR/EIS, Caltrans suggested the use of mediator at the executive level to reach an agreement. A Term Sheet was negotiated and approved by the Board of Directors for F/ETCA, OCTA, and RCTC in 2019, which laid out a schedule for sequencing projects within the SR-91 Corridor, ensuring all proposed transportation projects in the region would not result in inefficiencies and would not require redundancies in construction to achieve the ultimate build out. This Term Sheet also addressed concerns expressed by local city officials and the public related to construction fatigue. With approval of the Term Sheet, agreement on the conclusions of the 2019 Traffic Analysis, and agreement on the sufficiency of the analysis within the Final Supplemental EIR/EIS, Caltrans certified the Final Supplemental EIR/EIS in January 2020 and the Record of Decision for the project was signed in March 2020. Final engineering design for the project is currently underway and construction is anticipated for 2023.

Driven by skyrocketing e-commerce, the Inland Empire's Industrial Warehouse market is booming! With more than…